Translate
For Staff
Return to Headlines 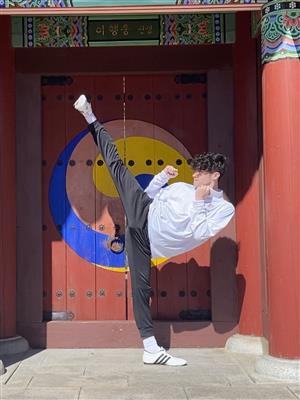 Student Spotlight: Matt Wolfe, a senior here at DJHS, just competed at a National Taekwondo event in Pittsburgh and with his win there, he is currently ranked number 1 in the world for Form!

Matt has been practicing Taekwondo for around 9 years. When he moved to Ohio in the 6th grade, he said he wanted to continue Taekwondo, and found a new martial arts studio called ATA (American Taekwondo Association) Black Belt Academy. After the instructors there encouraged him to compete in tournaments, he fell more in love with the sport. He has been competing in tournaments for the last 4 years now, and he says that sometimes it can be very demanding. For example, in September there were three weekends in a row where he traveled across the US. “It honestly feels like every weekend I am going to another state.” In total, he has been to 23 of the 50 states to compete. Two years ago, he made the USA National team for sparring, and last summer he was able to compete with the USA team to fight in the World Championships against countries like South Africa, Canada, and Argentina. Speaking of that entire process, he said “It was an incredible experience and I won the world title alongside my fellow teammates.”

Matt has also been the President of the French Club for the past 2 years, and also participates in the Fencing Club. Last year was the first year he competed as part of the Fencing Club and he placed 2nd at a Regional Invitational. After graduation, Matt plans on double majoring in French and a Pre-med track.